“There is a saying in the Indian scriptures, ‘All of Krishna’s soldiers were like Krishna.’ You can tell to which ray of the divine light a person is attuned by the consciousness he expresses in his life. He gives up his little ego and assumes a new radiance, colored by the vibration, or ray, of light that he has accepted as his particular path to God.

“It isn’t that he loses touch with who he is, in himself. That, one never loses. But he assumes responsibility for manifesting God in his life, instead of living in bondage to the ego with its limitations of likes and dislikes.

“Since your path is the one to which God has drawn you, you naturally express Him in that way. By attracting to yourself the guru’s realization of God, you attain his state of Self-realization.

“Does it make you a carbon copy of the guru? Just see the difference, on a human level, between Sri Yukteswar and my human self. Sri Yukteswarji was a gyani. My human nature, by contrast, inclines me rather to express divine love and joy. Yet inside, in our spirit, we are one.” 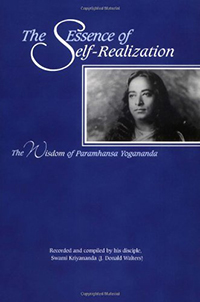