From Sadhu, Beware!,
by Swami Kriyananda

My Guru did not emphasize poverty as a necessity for his renunciate disciples. The word he recommended was simplicity. I’ve found in my own experience that people who own nothing at all, or virtually nothing, must live very much at their own center. Otherwise, complete non-possession may negatively affect their natural dignity. The case varies with individuals, of course, but complete non-possession works best for hermits who can immerse themselves solely in the thought of God. Most renunciates are apprentices in that practice. If their natures are affirmative, they may accept non-possession cheerfully, but for most people the practice of owning nothing can lead to feelings of oppression. If people haven’t the freedom to decide anything for themselves, the monk who receives no spending money of his own is likely to be like a plant in a deep forest, becoming spindly as it reaches up toward the sun. Though ascetic in appearance, perhaps, such a monk’s feelings may be starved quite unnecessarily for those little fulfillments which might help him to be relaxed and more natural in his spiritual search. He may find the custom of complete non-possession more suppressive than liberating.

I can somehow believe more easily in the raven that brought St. Paul his daily loaf of bread in the desert than in the impartial charity of monastic superiors whose duty is to supply their subordinates’ needs.

Some people reach liberation by expanding their self-awareness to infinity. Others achieve it by reducing the thought of self to non-existence. Both attitudes are expansive and beautiful. The mistake superiors often make, however, is to try to force everyone into the same mold. Indifference to individual needs, and even to people’s special realities, does more harm than good.

St. Francis of Assisi is fondly remembered for his love affair with “Lady Poverty.” Yogananda, who described Francis as his “patron saint,” said also, “Instead of ‘Lady Poverty,’ I prefer the expression, ‘Lady Simplicity.’”

Money and possessions, like every delusion, are harmful principally in strengthening ego-consciousness. In traditional monasteries, the practice of having no personal money is of course intended to free members from attachment to money.

I wonder to what extent, however, complete lack of money doesn’t in some way, at least, inhibit a person’s creativity. It is very well not to care about wealth, but not to care how one’s needs are met also suggests to my mind a kind of passivity that cannot, in itself, lead to God-realization. When your superiors, out of a wish to encourage you to depend completely on God, provide you with every need, the chances are you will find yourself depending on them rather than on God. Monasteries generally approve of this spirit of passive dependence. I cannot say, however, that I have ever seen anyone particularly benefited by this attitude.

What I think such passivity usually develops, rather, is a kind of sudra attitude – a weakness of will that diminishes one’s courage and ability to stand firmly on his own feet in the face of everything. Any self-debasing attitude cannot but be spiritually harmful. 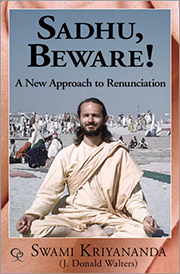