Swami Kriyananda wrote A Renunciate Order for the New Age as a new approach to renunciation. The old way was defined by what one doesn’t do, and can even be life negating. This new renunciation is God- and bliss-affirming, and is more of an inner practice. As Swamiji put it:

“The old method of renunciation was world-negating; the new one is samadhi-affirming. One’s concentration, in other words, is on the joy of soul-freedom in God.

“The old renunciate order tended easily toward judgmental attitudes—of others, and (in some ways even worse) excessive judgment of oneself. The new renunciate order concentrates supportively on everyone’s soul-potential; it sees all beings as striving, each in his own way, toward union with bliss.”

He also saw spiritual pride developing in those who think that what they do makes them more spiritual. This new approach to renunciation renounces the ego, and not mere things. He wrote that:

“In India, tradition has inculcated in people the idea that service to those who are more highly spiritual than oneself is a way of evolving personally. It is a good tradition. Merely to have embraced formal renunciation, however, in no way guarantees high attainment. Many swamis and other renunciates, on finding people eager to serve them, develop an expectation of being served, and in time come to assume that such service is their natural due. In this attitude they strengthen, but don’t expand, their ego-identity.

“Thus, in creating a new renunciate order, I want to address above all the fundamental purpose behind the monastic life itself: ego-sublimation, or transcendence, and the attainment of oneness with the greater Self of all: God. As Paramhansa Yogananda wrote in his great poem, “Samadhi”: “Myself, in everything, enters the Great Myself.””

The following marks of a true renunciate, from A Renunciate Order for a New Age, are an excellent way to view one’s own progress on the path of renunciation — regardless of whether one is single, married, or monastic.

Marks of a True Renunciate

What, then, are the marks of those whom I’d consider worthy of being accepted as true renunciates? They would be those who have achieved noteworthy progress toward the attainment of the following virtues:

1. They have no, or very few, attachments or desires.

2. They are without anger. (Anger appears in the heart when one’s desires are thwarted.)

3. They accept without prejudice whatever life gives them, and live by the principle, “What comes of itself, let it come.”

4. They never seek to justify or defend themselves, but accept all judgment by others dispassionately, as experiences given them by God for their higher good.

5. They keep in their hearts primarily the company of God.

6. They are indifferent to others’ opinions of them.

7. They work without personal motive, to please God alone.

9. They see all beings as striving toward the attainment of Satchidananda: ever-existing, ever-conscious, ever-new Bliss, no matter how presently misguided the efforts of some people may be. Thus, they feel kinship with everyone, and with all life.

10. They accept nothing as their own, but only as being “on loan” to them, for the benefit of others.

11. They view pleasure and pain equally, as opposite (or dual) expressions of eternal, divine bliss.

12. They have meditated daily for years.

13. Because they are always happy in themselves, they are impervious to insults, outer suffering, failure, defeat, or disaster. They strive to live the ideal that Paramhansa Yogananda voiced when he said, “You should be able to stand unshaken amidst the crash of breaking worlds!”

14. They strive to love God unceasingly, and ever more deeply, in a spirit of utter openness to be guided by His will. 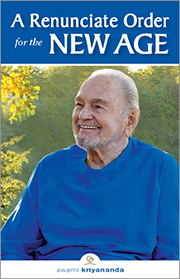 Read A Renunciate Order for the New Age online.